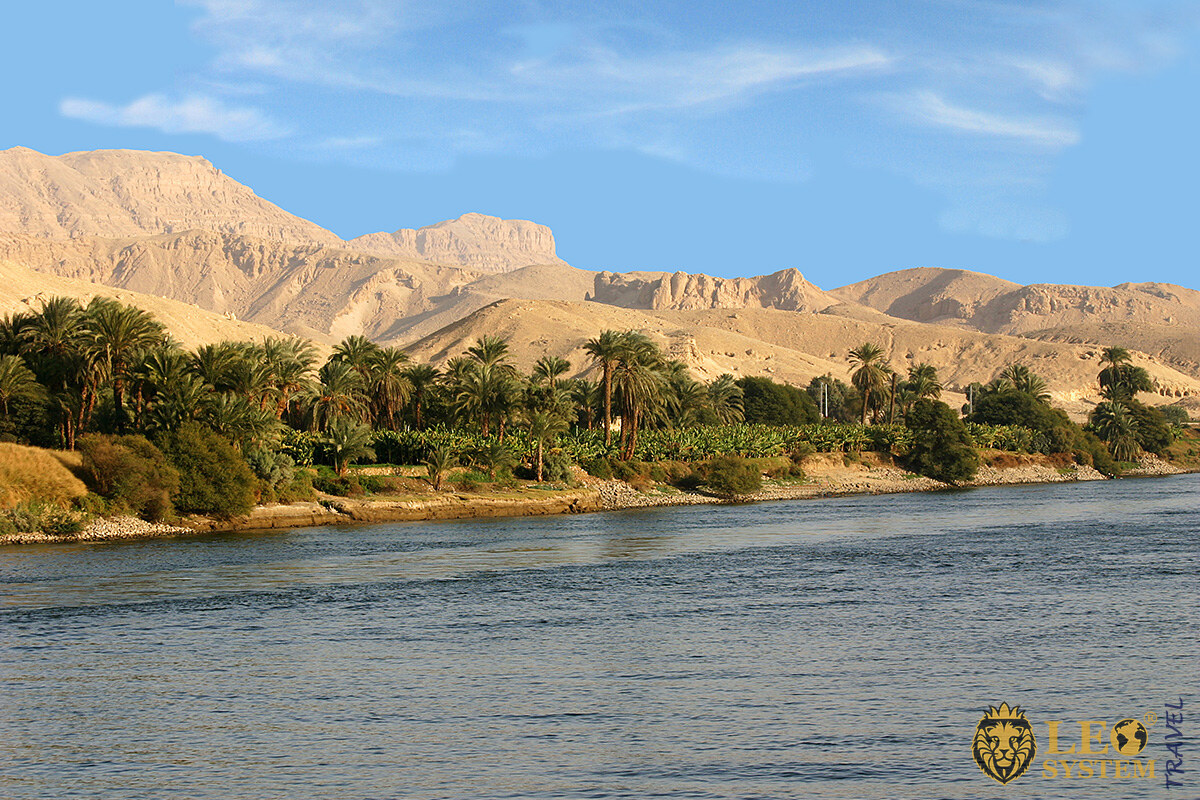 Africa is the continent where the ancestors of humans originated, and where we all originated from. It is a continent that is known for its diverse cultures and history, and admired for its natural beauty that is constantly portrayed in wildlife documentaries broadcast all over the world.

Apart from that, Africa is a continent to watch out for, it is currently ranked second in the world in terms of size and population, but the continent’s population is projected to double to 4.3 billion people by the year 2100. 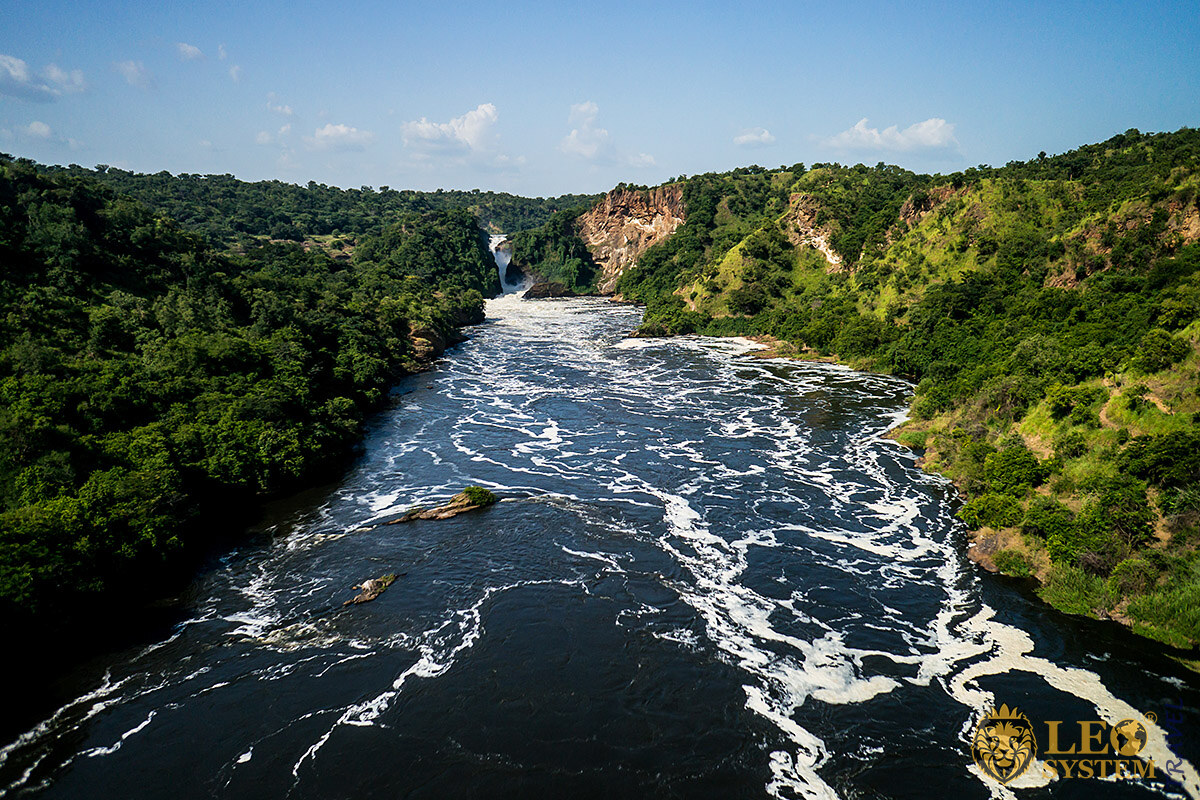 Probably the best-known river located in Africa, the Nile River is the longest river in the entire world, running a total of 6,650 kilometers in length from Kenya all the way to Egypt. In total, the river passes through eleven countries on the continent, although it does vary in size from country to country.

For example, in some countries, the river is the size of a small stream while it gets closer to the Mediterranean Sea it turns into a very powerful river that is used for dams that generate electricity in Ethiopia and are essential for the agriculture industries in countries such as South Sudan, Sudan, and Egypt. In total, the river’s basin size is around 3.4 million square kilometers in size, which is equivalent to about a third of the entire size of Europe.

The river is also very well known for its connection to the great Ancient Egyptian civilization that existed for thousands of years in what is modern-day Egypt. It was a civilization that was well ahead of its time in terms of culture and technology, and their giant pyramids that stood at 146.5 meters in height were the tallest buildings in the world for thousands of years. 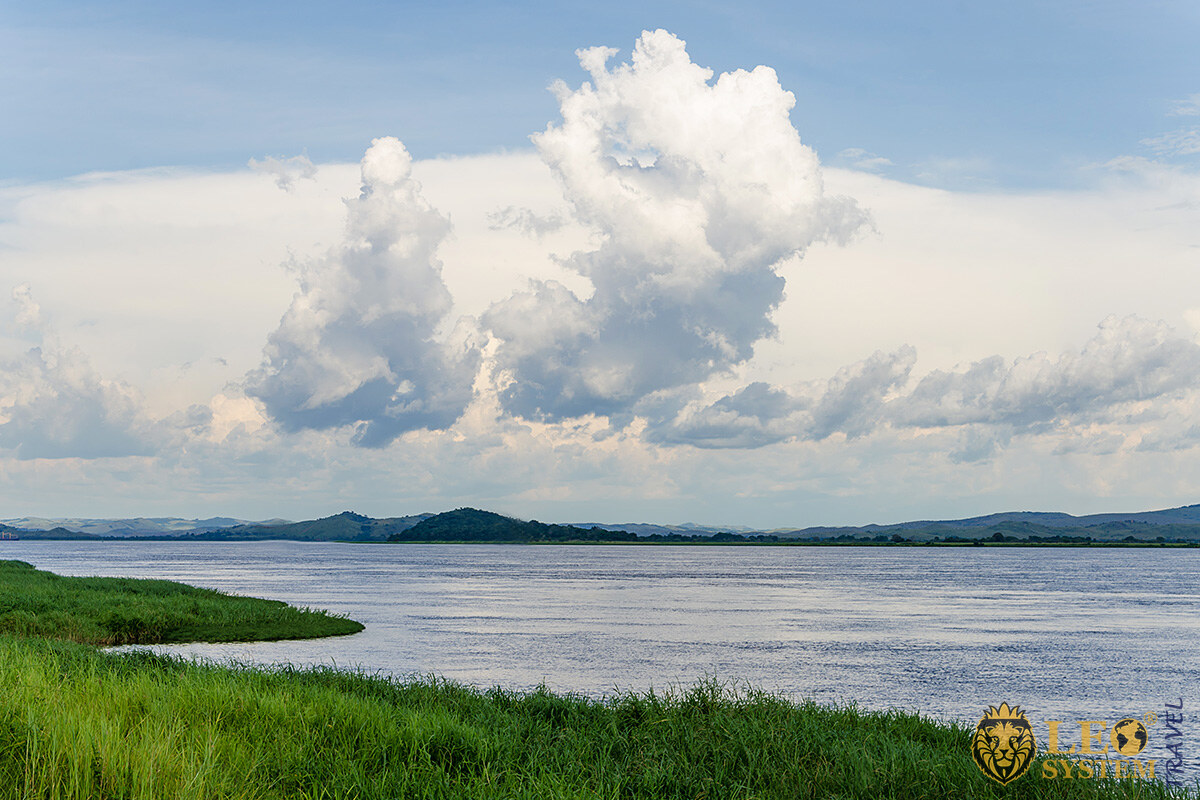 As the name may suggest, the Congo River is based in the Congo region of Africa, but where exactly is that? The source of the river is located in northern DRC (full name Democratic Republic of Congo) with the river flowing all the way through the center of the country down the central region that borders the South Atlantic Ocean.

At the location where the river meets with the South Atlantic Ocean is where the river comes into contact with another country, Angola. However, the river never actually enters inside Angola, but instead; it just borders a part of northern Angola.

The river is fueled by 14 tributary rivers, the majority of which are located inside the Democratic Republic of Congo, however, some such as the Kasai River which starts off in Angola and runs straight through southern DRC and feeds into the Congo River.

Apart from that, the Congo River plays a key geopolitical role, with the river acting as a natural border between the countries of DRC and the neighboring country of the Republic of the Congo.

The Congo River is 4,700 kilometers in length and its basin is over 4 million square kilometers in size which includes all of the tributaries and areas that feed the river water throughout its journey such as hills where the water goes down into the river. 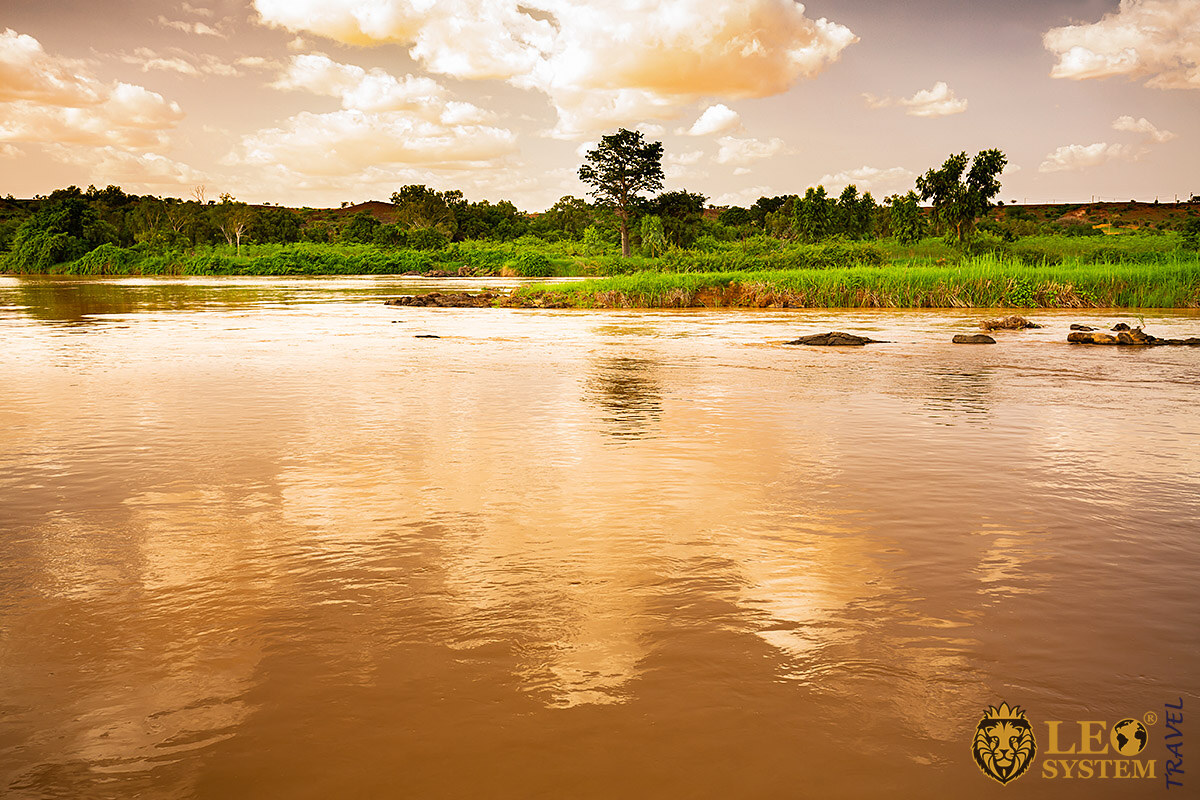 The Niger River is another river on this list whose importance is illustrated by the fact that it is behind the name of countries, which are Nigeria and Niger.

These two countries are the future of Africa, with Nigeria expected to have a population of 703 million people by 2100 which will make the most populated country in Africa and will also allow it to retain its position as one of the biggest African economies. This 4,180 kilometer long river that has a basin of over 2.1 million square kilometers will likely continue to be the lifeblood of much of the country.

This river starts off in the country of Guinea, in a lush green mountainous region located in the middle of the country, from there the river flows in a unique semi-circular pattern into Mali, then Niger, Benin where it acts as a natural border, and finally into Nigeria.

Furthermore, on the Niger River is located in the Kainji Dam which is a hydro dam located in western Nigeria that is used to generate electricity and power to millions of people in the country. 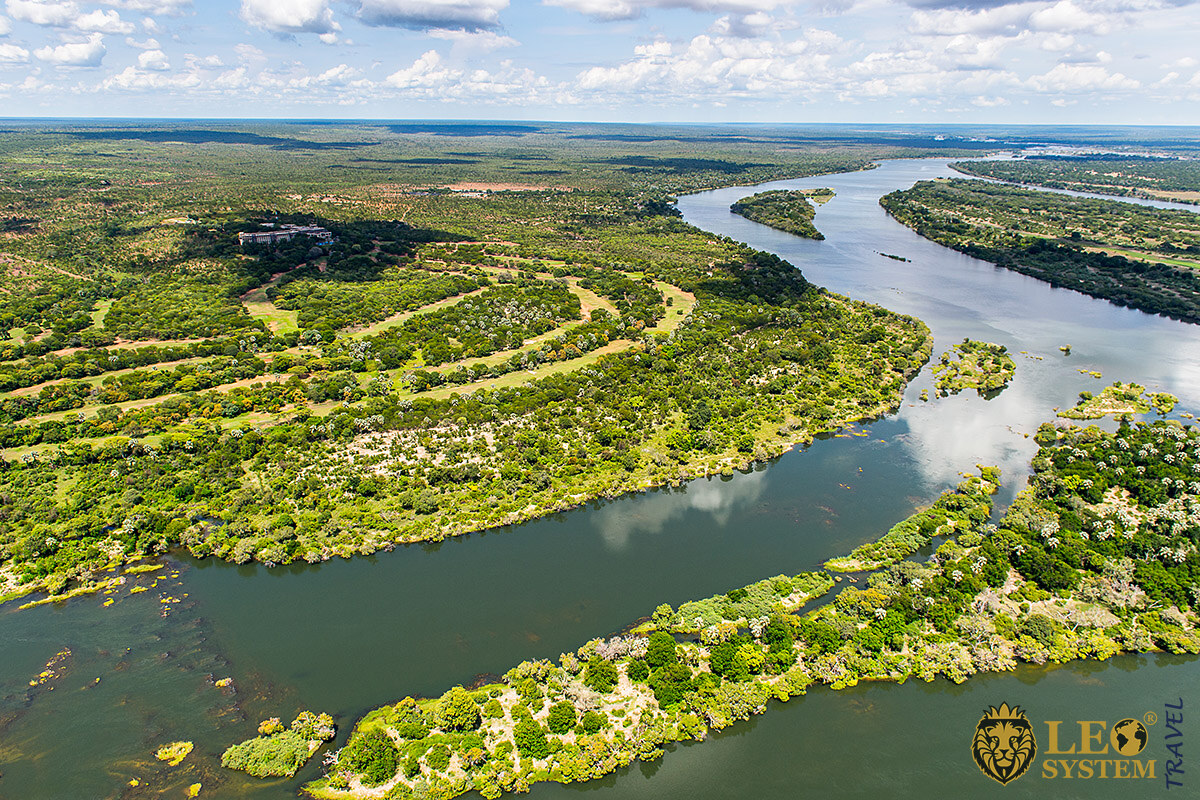 Here we have the fourth-longest river in Africa, the Zambezi River. This river begins in the northwestern part of Zambia, near the small town of Mwinilunga.

In total the Zambezi River has a length of 2,574 kilometers while it has a small basin of close to 1.4 million square kilometers with the river widening in two areas known as the Lake Kariba and Lake Cahora Bassa.

This river is the source of the famous natural landmark known as the Victoria Falls, which is the largest waterfall in the world which has a width of 1.7 kilometers. Additionally, the Zambezi River is well known for being a source of gold in certain areas, with the gold being found in rocks in the base of the river. Furthermore, the river is a water source for big mammals such as elephants, lions, and leopards. 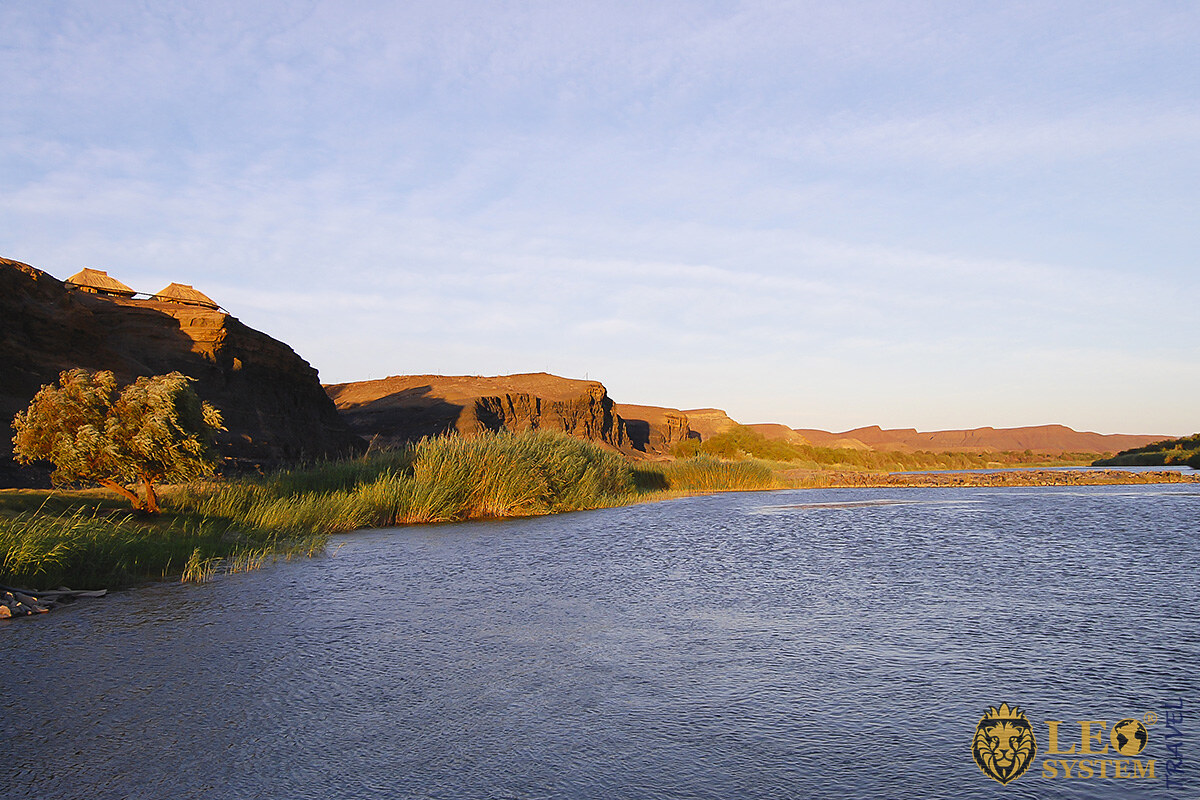 The river was discovered by Dutch explorer Robert Jacob Gordon who named it after the House of Orange who was the royal family of the Dutch Empire at the time and remains the monarchs of the Netherlands to this day.

Even though the majority of this river is located within the borders of South Africa, many of its tributaries are located in southern Namibia in the west while the easternmost part of the river is fed by tributary rivers that originate in the country of Lesotho that is entirely surrounded within South Africa. In total, this river runs through three countries, Lesotho, Namibia, and South Africa. 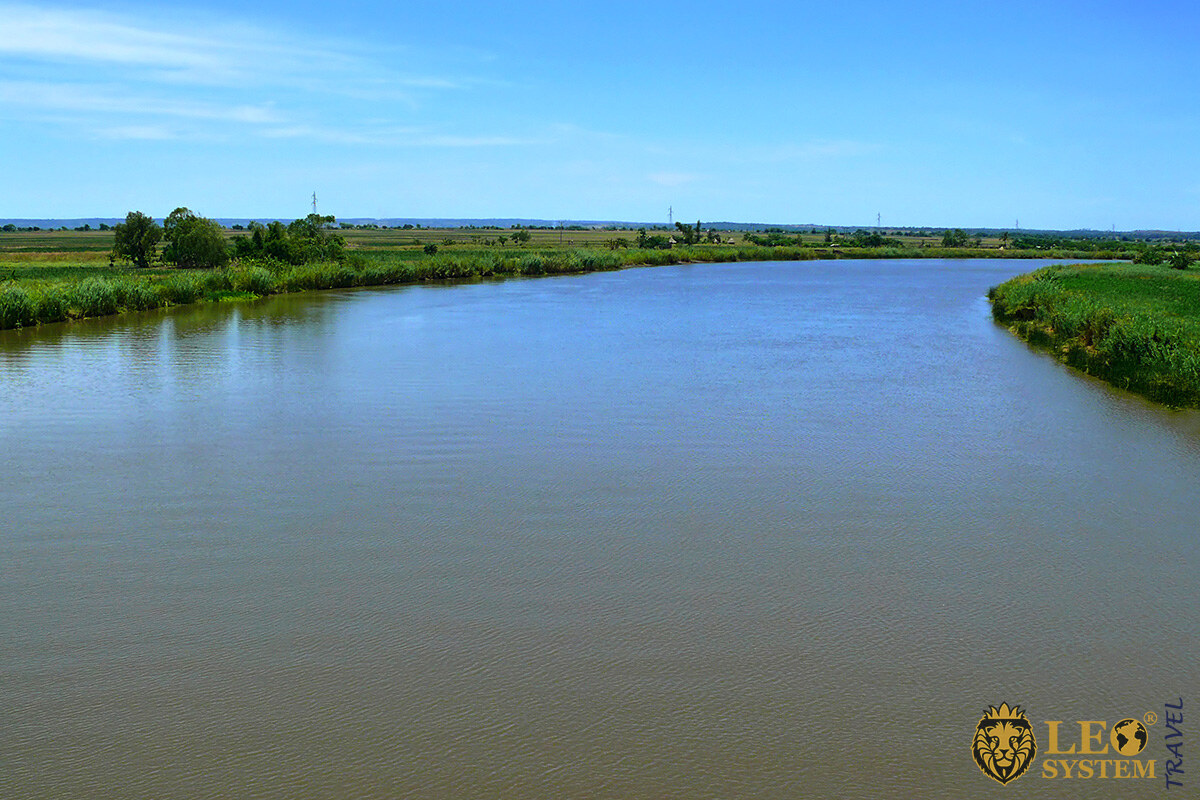 Another key river that we have included in this largest rivers in Africa article is the Limpopo River, the river is 1,750 kilometers in length with the river starting off in South Africa and passing through Botswana, Zimbabwe, and Mozambique where its mouth enters the Indian Ocean from southern Mozambique.

Another interesting fact about this river is that sharks often swim from the Indian Ocean into the river in order to hunt for fish and other animals that happen to be in the water.

Limpopo River has a diverse group of tributaries that are located in northeastern South Africa and the southern parts of Botswana, Zimbabwe, and Mozambique. It is also believed that tens of thousands of years ago that the Limpopo River was a tributary river of the Orange River, however, over time it separated due to diverging waters.

Many of the tributaries of this river run through beautiful landscapes, such as the Levubu River that passes through what is known as the ‘Fever Tree forest area’. Altogether thanks to its tributaries such as streams, rivers, and lakes, the Limpopo River has a basin of 415 thousand square kilometers. 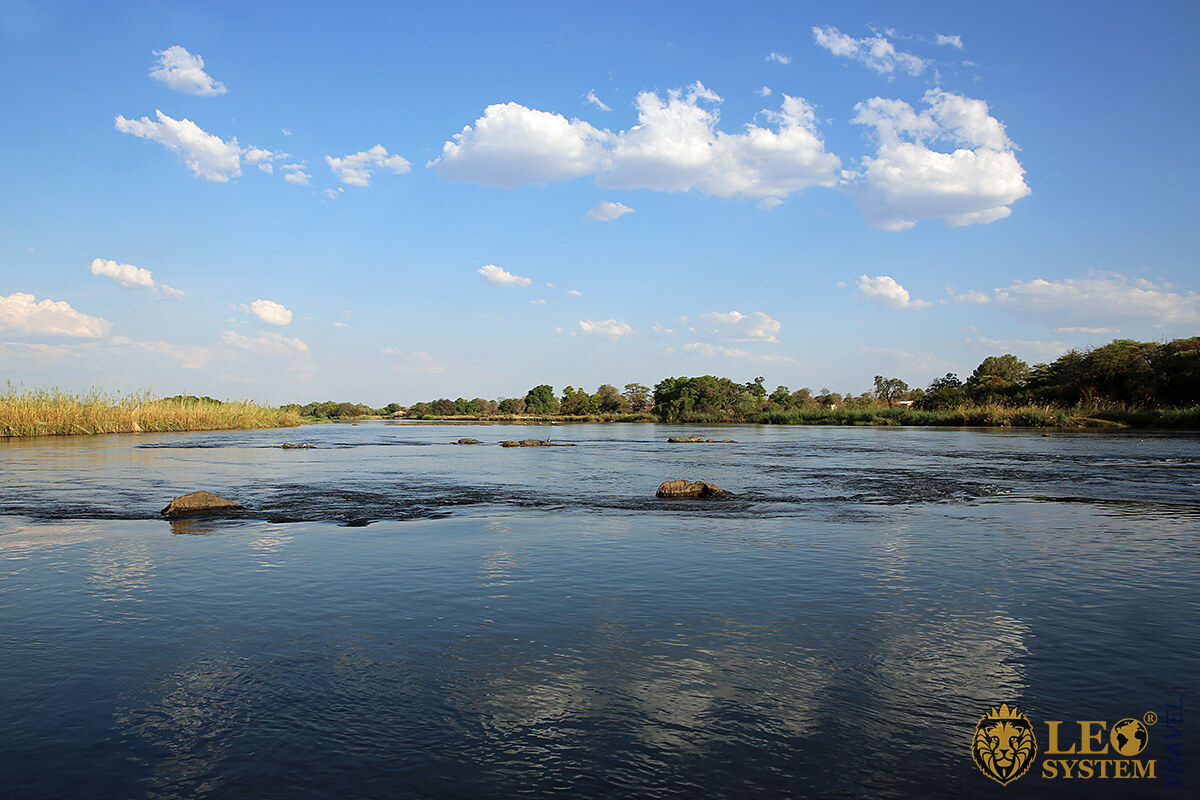 The Okavango River is the seventh-largest river in Africa, the river is also known by its Portuguese name. The river is 1,700 kilometers in length has an estimated basin size of 530,000 kilometers squared. As of writing this article, the river runs through three countries which are Angola, Namibia, Botswana.

The river forms up in the north from tributaries located in Angola and Namibia, which join together as they go south towards Botswana and eventually become one river.

Moreover, the river runs through the Moremi Game Reserve located in Botswana, which is a popular tourist destination for people that want to view up-close exotic African animals such as cheetahs, elephants, and zebras to name just a few. Nearby, this game reserve is where the Okavango River empties itself.

There are also what is known as wet seasons which occurs due to high rainfall that leads to areas that are usually deserts turning into swamps, this usually occurs in Namibia and Botswana. 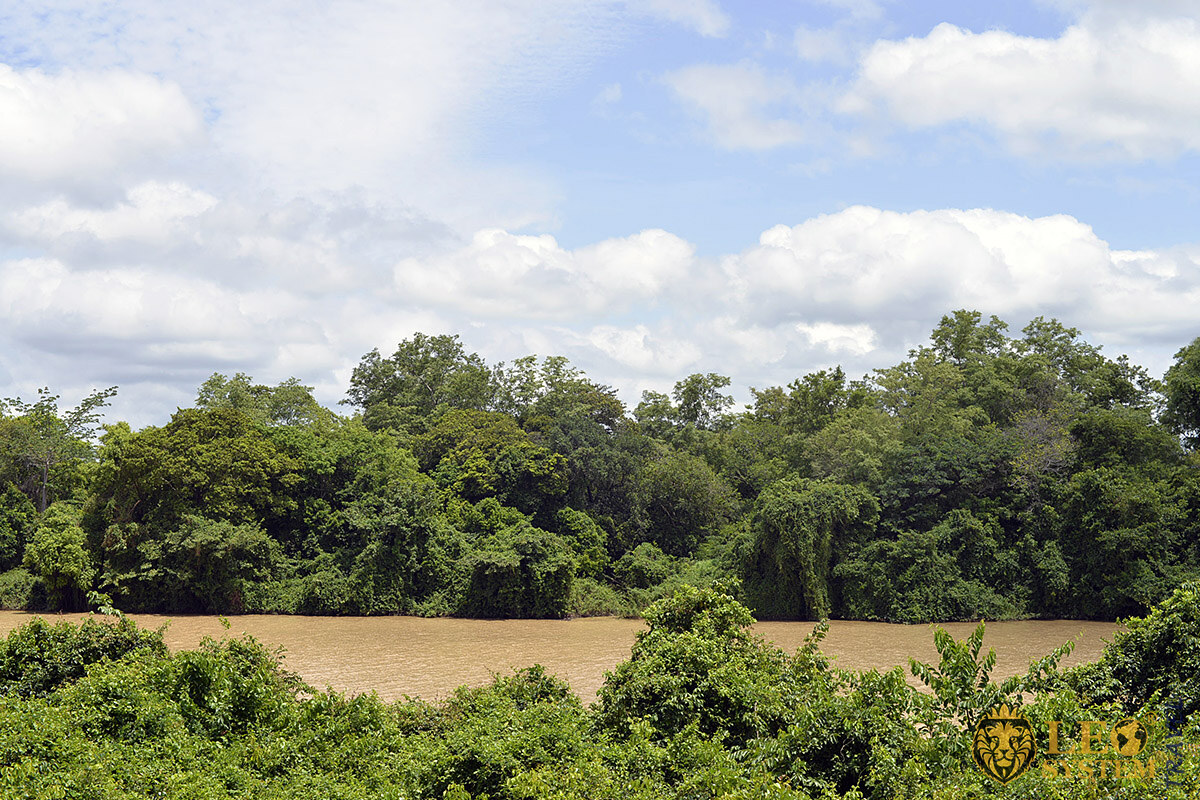 The Volta River is the main river in the country of Ghana which is located in West Africa, with the river starting off in Burkina Faso and a part of the river also entering the Ivory Coast to the west. Interestingly enough, the river is made up of three main tributary rivers called the Black Volta, the White Volta, and the Red Volta.

A part of the river near the southernmost part of Ghana where the river empties into the Gulf of Guinea is known as the Volta Lake, although it is not actually a lake. But it is known by this name due to how thick the river gets in that certain area.

In total, the river is 1,500 kilometers in length which can be quite surprising due to the constrained area that the river is in, in fact, the river’s name is said to originate from the Portuguese word for ‘Twist’ which is ‘Volta’. While also having a river basin size of 407,000 kilometers squared. 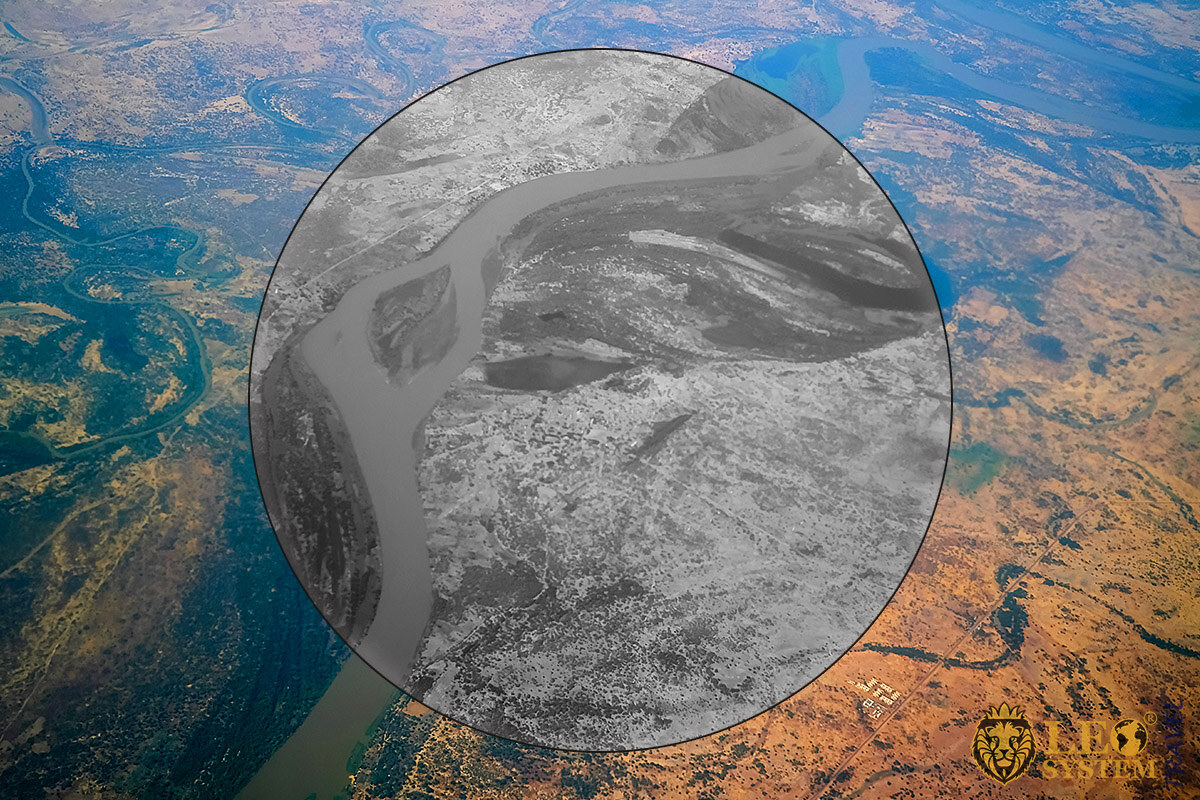 The centrally located river known as the Shari River or the Chari River, it travels through three countries, the Central African Republic, Chad, and finally Cameroon. It is an influential river in the area that has a watershed of close to 550,000 square kilometers with multiple tributary rivers, with the biggest one being the Logone River. Other tributary rivers include the Bahr Salamat and the Ouham River.

The 1,400 kilometers long river is a major source of food and resources for the local population that happens to live close by to the Shari River, these resources include fish that help feed people and are a major export. 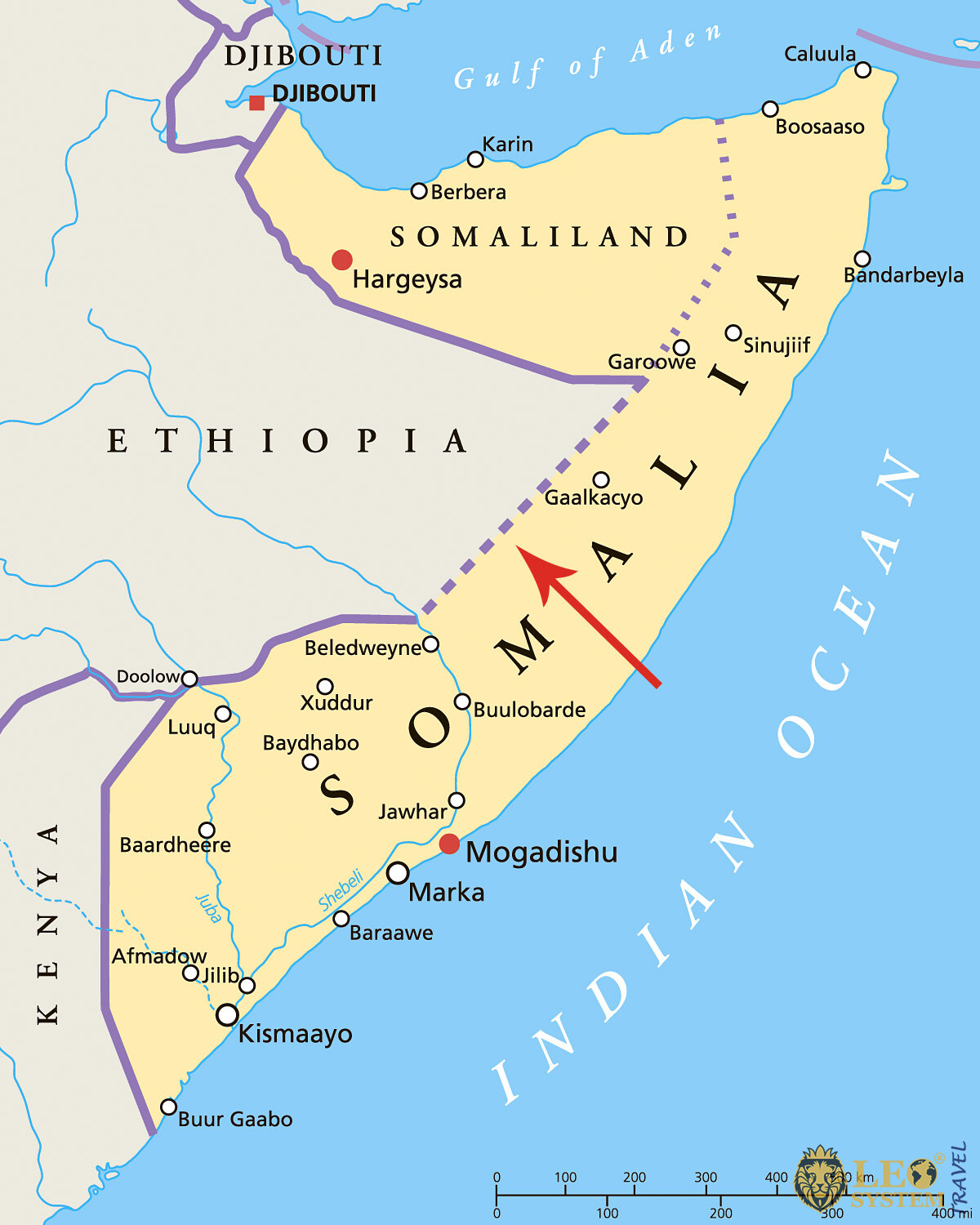 Last but not least in this largest rivers in Africa article we have the Jubba River also spelled as the Juba River it is the tenth-largest river on the African continent with a total estimated length of 1,004 kilometers.

The river is named after the state of Jubaland that is located in Somalia, although the river does originate in Ethiopia from rivers such as the Dawa, Ganale, and Gestro rivers that act as tributaries.

The majority of the towns and cities in the province of Jubaland are located next to the Juba River, such as the provincial capital of Kismayo that is located at the mouth of the river that empties into the Indian Ocean.

Thanks to the fertile areas around the Jubba River, it is one of the richest and most thriving areas in Somalia, the river’s 750 thousand square kilometers basin is home to untouched wildlife that is home to animals such as hippos, hyenas, and giraffes among other animals.

Also read the article: The World Of Predatory Animals In Africa